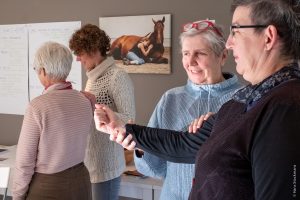 Saying what you see can be different from saying what you think you see… With our senses we can perfectly observe reality. However, from the moment we give words to our observations they become coloured by our own frame of reference: after all, everybody is looking at reality through an own perspective.

Horses immediately link observation to an action. Amongst people there’s an (often unconscious) colouring between observation and action due to the own frame of reference.

That plays a part in giving (and getting) feedback. Corrective feedback is often interpreted as biased criticism when sender and receiver of a message don’t get attuned by (unconsciously) being stuck in their own interpretations / own frame of reference. Appreciative feedback can be so much more than a sincere compliment.

This workshop can be designed made-to-measure to live up to specific needs of your team / organization.