At this very moment, my youngest brother is probably giving an amused wink, thinking “Here we go again…”. We have gorgeous brother-sister conversations about this topic. According to my brother it exists, according to me it doesn’t.
Who’s right? Both of us (although my feeling shouts: “Me!”)

Coincidence or not, very often things just come together. To me, these things are small signposts that lead to unimaginable ‘coincidences’. In English there’s a word for it: serendipity.

One such occurrence brings me to writing this blog.

During Summer 2016, I gave a workshop on the Solution Focus Summer Retreat in Szigetmonostor, Hungary. I wanted to share the essence of what I do with my organization Equoia. Reactions were overwhelming. Natalie, one of the Hungarian participants, took me by the shoulders on the last day of the Retreat, looked me straight into the eyes and said: “Wendy, this was fantastic. You must promise me to never stop spreading this!”.

Little did I know that this was to be continued… 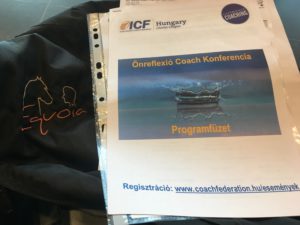 In February 2017, Natalie sends me a mail. She has been asked to give a workshop on the conference of the International Coach Federation in Budapest, and she wants to do this with me. Whether I was in for the idea? For a minute I’m in doubt: the conference takes place in the week before I’ve planned the 3rd Guided Tour of Equoia on my own location. This event requires a lot of preparation, that’s why I had wanted to keep the week before free. On the other hand, I really liked the idea of giving this workshop together.
I said yes, under the condition that it would take me only one day. A week later my plane tickets are booked and we’ve skyped to set the main frame for the workshop. It feels like we’ve been working together for years.

Two days before the conference I print the plane tickets and I notice that my name is misspelled. I call the airline company. “This probably shouldn’t cause any trouble, mrs”. I choose for the safe side and have the mistake corrected. Nothing wil stop me from going to Budapest!

The day before the conference, both enthusiasm and adrenaline take over. I feel like a little child on the evening before Christmas. An hour before going to bed, my adrenaline level even increases when Natalie and I have a last skype conversation in which we last minute alter the concept of the workshop again.

May 17th. Petra, a good friend of mine, is so nice (ánd so crazy) to call me at 4 a.m. to ensure that I get out of my bed in time. When she calls me, I am already outside, feeding my horses. I take a shower, get ready and at 4.45 a.m. I take off to Brussels South Airport.

Ten minutes earlier than foreseen I land in Budapest, another ten minutes later I am in a taxi to give Natalie a big hug about half an hour before the start of our workshop. Meeting a soulmate! 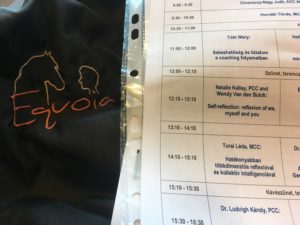 op (“Self Reflection: Reflexion of me, myself and you”) goes as if we’ve been working together for years. Our last minute preparations on skype and the ones I did on the plane this morning remain untouched. Faithful to the message we want to bring, we give direction to what pops up, thus creating a workshop that differs again from what we had in mind: a masterly example of “Be prepared, then go with the flow!”.

Reactions are flabbergasting. I am touched by so much acknowledgement.

During lunch, we chat up while now and then people come to us to congratulate us with our workshop, amongst them the chairwoman of ICF Hungary.

After lunch, I follow another workshop together with Natalie, in Hungarian. Natalie translates the background info in English, then there’s an experiment. 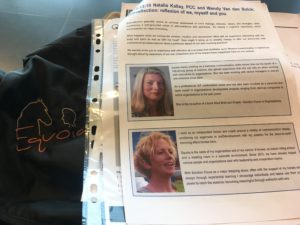 A coaching exercise is planned, in groups of three: a coach, a coachee, an observer. I take up the role of observer and ask both others to do the coaching in Hungarian. John Brooker inspired me for this experiment: last Summer in Szigetmonostor, he talked about a Solution Focus coaching during which coach and coachee spoke another language and they didn’t understand each other’s language. The questions of the coach were translated for the coachee, the answers of the coachee were not translated for the coach. Still, it became a successful coaching, thanks to the power of solution focused questions and the information that came from nonverbal communication.

And so I was observing a coaching of which I didn’t understand one single word. After the coaching, I shared what I had noticed about the process between coach and coachee, and this remarkably matched with what both Hungarian colleagues had experienced in the process of their coaching session. Extraordinary!

At 3 p.m., the taxi picks me up to bring me back to the airport. Check-in goes fast, I have an hour left and find myself a quiet spot to go through the experiences of the day. On the plane I enjoy the view and I muse on happiness…